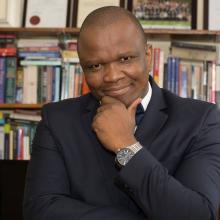 Thapelo Otlogetswe is a Fulbright visiting scholar from the University of Botswana where he is a Professor of Linguistics and Lexicography. At UC Davis he is hosted by the Department of Linguistics where he works with the department chair, Raul Aranovich, on computing the Setswana language. Their work comprises a computational analysis of a 20 million-word Setswana language database whose results will aid in the writing of a Setswana monolingual dictionary which  will be published in 2022. The dictionary will be used in Botswana, South Africa, Namibia and Zimbabwe where Setswana is spoken widely. Thapelo read for his Master of Philosophy in Linguistics at Oxford University and later pursued doctoral studies in Corpus Lexicography at the University of Brighton and the University of Pretoria. His principal research is in the broad area of the intersection between language and computing. For the last ten years he has established himself as the leading expert on language computing and dictionary making systems, in particular that of the Setswana language. As a member of the languages arm of the African Union (the African Academy of Languages) he has  led dictionary writing training programs in numerous countries such as Angola, Niger, Mali, Nigeria, Swaziland and South Africa. He has written twelve books, seven of which are dictionaries of various types. Thapelo Otlogetswe is a recipient of Botswana’s prestigious Presidential Order of Honour.