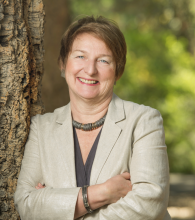 Joanna Regulska is the vice provost and associate chancellor of Global Affairs at the University of California, Davis, where she also is a professor of Gender, Sexuality and Women’s Studies.

For more than three decades Regulska has led large-scale programs that have transformed institutions, established collaborative partnerships, and substantially improved internationally focused services for students, faculty, and staff—and has raised more than $9 million in public and private project support.

Most recently, Regulska has developed visionary initiatives at UC Davis: striving to provide all students with valuable international or intercultural experiences before graduation through a UC Davis Big Idea of Global Education for All; and strengthening the university’s international research, education and engagement efforts through Global Centers.

A respected scholar, Regulska’s research concentrates on women’s political activism, grassroots mobilization, decentralization, democracy and democratization, with a focus on Europe and the Caucasus. She is the author or co-author of eight books, author of over 100 articles, chapters and reviews, and member of numerous advisory boards.

A commitment to diversity, social justice, and the empowerment of women led Regulska to establish graduate degree programs in gender studies at the Central European University (Hungary) and Tbilisi State University (Republic of Georgia).