Regulska recognized by IIE for transforming the international education landscape

Joanna Regulska, vice provost and associate chancellor of Global Affairs at the University of California, Davis, has been honored as the first-ever recipient of the Senior International Officer (SIO) Award from the Institute of International Education (IIE).

The award, which was presented to Regulska in Washington, D.C. on May 29 by IIE President and CEO Allan E. Goodman, is reserved for SIOs showing leadership across the spectrum of international education, while developing cohesive strategies, driving innovation, advancing impact, and fostering relationships.

Throughout her more than three decades in the field, Regulska has led large-scale programs, established collaborative partnerships, and substantially improved globally focused services—all of which have led to groundbreaking institutional global engagement.

Since becoming the first chief global strategist as vice provost and associate chancellor of Global Affairs at UC Davis in 2015, Regulska has set strategies and expanded connections with partners around the world. She has also overseen the development of innovative programs for students, faculty, scholars, and staff, and has made key administrative decisions in building a comprehensive global office.

Regulska is currently championing two visionary initiatives at UC Davis: an ambitious goal to provide 100 percent of students with valuable international or intercultural experiences before graduation through a UC Davis Big Idea of Global Education for All; and a strategy for strengthening the university’s international research, education and engagement efforts through Global Centers in regions around the world.

“Joanna being selected to receive this inaugural award from IIE confirms her extraordinary and distinguished contributions to the field, to UC Davis, and to the broader global community,” said UC Davis Chancellor Gary S. May. “IIE has been a strong partner for UC Davis and we look forward to continuing our important work with them in support of international education and collaboration.”

Under Regulska’s leadership, Global Affairs at UC Davis has grown tremendously. Several new programs have been expanded including award and grant programs for faculty, an ambassador program for faculty and staff, and diversified Study Abroad and global learning opportunities for students. She has championed UC Davis joining new networks including Universitas 21 (U21), UN Academic Impact, and the U.S. Chapter of the UN Sustainable Development Solutions Network, with efforts towards mapping involvement with the UN Sustainable Development Goals (SDGs) currently underway.

New staff members have been added to develop key areas including communications, faculty engagement, global engagement, global learning, international partnerships, and travel security—leading to improved campuswide processes and resources. Regulska is known for being a passionate advocate for international education and global engagement—and a generous mentor to up-and-coming SIOs, rising professionals in the field, and students.

“A visionary in the field, Joanna continues to inspire colleagues, partners and students around the world with her dedication and creative energy,” said UC Davis Provost and Executive Vice Chancellor Ralph J. Hexter. “She has truly transformed the landscape of international engagement at UC Davis.”

In just four years, Regulska has been the driving force behind many first-time achievements  at UC Davis—ranging from being selected as an institutional host for the Mandela Washington Fellowship for Young African Leaders and as a campus host for UN Millennium Fellows to establishing a campus policy for travel security and a streamlined process for international agreements. Last fall, Regulska set in motion an international and interdisciplinary research conference that attracted more than 200 experts from 22 countries to UC Davis.

New rankings and recognition have followed suit. UC Davis ranked third among large universities in producing Gilman Scholars for 2016-17, ranked tenth for number of international scholars hosted in 2017-18, and produced the largest number ever of UC Davis Fulbright U.S. Students for 2018-19.

Before her time at UC Davis, as Rutgers University’s first vice president for international and global affairs, Regulska led another major effort to build its first centralized office, which earned NAFSA’s Senator Paul Simon Award for comprehensive internationalization in 2014.

Beyond her SIO role, Regulska is a professor of Gender, Sexuality and Women’s Studies at UC Davis and is a respected scholar concentrating on women’s political activism, grassroots mobilization, democracy and democratization, with a focus on Europe and the Caucasus. She is the author or co-author of eight books, author of over 100 articles, chapters and reviews, and a member of numerous advisory boards. She founded the Local Democracy Partnership Program, serves on the Founder Board of The Foundation in Support of Local Democracy, and established graduate degree programs in gender studies at the Central European University (Hungary) and Tbilisi State University (Georgia).

“It is an honor to receive this distinguished award from an organization I admire,” said Regulska. “I would like to share this recognition with my cherished colleagues from UC Davis, Rutgers University, and many partners around the world. I am continually inspired by their knowledge, wisdom and commitment to advancing this shared vision of global engagement and to creating access to global learning for all students.”

About the Institute of International Education (IIE)

Established in 1919 with the founding premise that international exchange could make the world a more interconnected place, the Institute of International Education has championed international education and pioneered new models of collaboration across institutions of higher education with a worldwide reach. Today, IIE proudly supports flagship educational and cultural exchange programs on behalf of the U.S. Departments of State and Defense, in addition to government, corporate and foundation programs. IIE is proud to assist scholars, students and artists threatened by conflict and unrest in their home countries.

A Message to the UC Davis International Community 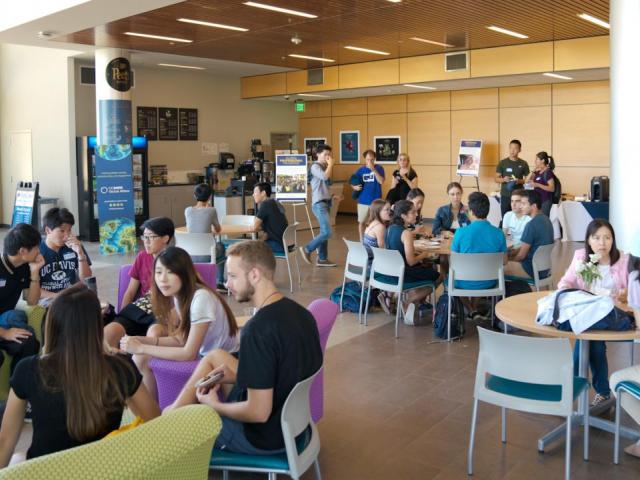 The Global Learning Hub is envisioned as a locus of the UC Davis commitment for Global Education for All and will link programming and resources across campus that support student access to global learning.